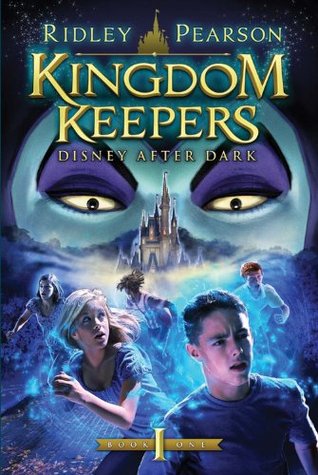 “You can’t get any ‘cooler’ than Disney World.” ~ Ridley Pearson, Disney After Dark

Finn and four other teens are picked as DHIs, or Disney Host interactives and Daylight Hologram Imaging, for Walt Disney World.  During the day their holograms guide guests around the Magic Kingdom, but at night time Finn and the others discover that they are transported to the park at night as their holograms and find out that everything there seems to come alive.  They learn through the Imagineer Wayne that they were picked as DHIs to help defeat the Overtakers, who not only want to take over the Disney parks but also the real world.

Excuse my poor attempt at summarizing Disney After Dark but it took me about 8 to 9 months to read the book so I had to reread the back cover to fill in the holes of the story line I couldn’t completely remember.  And by the first sentence you may already be able to tell that I didn’t love this book because it took me too long to read something meant for 11 to 13 year olds.

I initially bought Disney After Dark while I was planning my Disney World trip last year. As I was planning my vacation I would watch tons of Disney vloggers on YouTube to get an idea of things to do at Disney, and noticed that a few them would mention the Kingdom Keepers Series as books they liked to read that were set in the parks.  Now mind you most of the people who suggested these books were around my age so between 25 to 30. I figured if they read the book and liked it then I should try it too.  Well the main issue I had with Disney After Dark isn’t that it was too young for me but rather that the characters were too young for the author.

Now I don’t know how old Ridley Pearson is nor do I know if he has any kids, though I do imagine the latter part is true; but I do know that his perception of how the average 13 year old speaks and/or interact with each other distracted me through out this entire book because of how off it felt.  Now I’m nearly 28 (only a month away. Yikes!) so I haven’t been 13 for almost 15 years now and I don’t work in a setting with teens nor do I have kids but I can state with confidence that the 5 DHIs in Disney After Dark isn’t an example of who 13 years old are. I mean it can’t be because I don’t believe anyone’s talked this way since at least 1999.

I do want to add that I didn’t hate Disney After Dark (After I devoted a lengthy paragraph about the characters), it is a cute book  with adventure and is set in the Magic Kingdom. As someone who loves Disney I enjoyed that the books main focus is on all things Disney. I enjoyed this fact so much that I’m probably going to attempt to finish the series even though I am prepared to cringe through all the dialogue along the way.

Is there a book series that you continued to read even though the first book in the series wasn’t fantastic? Did you end up liking the other books? Let me know in the comments below.