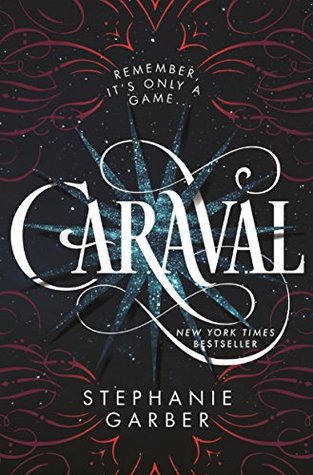 “Whatever you’ve heard about Caraval, it doesn’t compare to the reality. It’s more than just a game or performance. It’s the closest you’ll ever find yourself magic in this world.”
― Stephanie Garber, Caraval

Scarlett Dragna has never left the tiny island where she and her sister, Tella, live with their powerful, and cruel, father. Now Scarlett’s father has arranged a marriage for her, and Scarlett thinks her dreams of seeing Caraval—the faraway, once-a-year performance where the audience participates in the show—are over.

But this year, Scarlett’s long-dreamt-of invitation finally arrives. With the help of a mysterious sailor, Tella whisks Scarlett away to the show. Only, as soon as they arrive, Tella is kidnapped by Caraval’s mastermind organizer, Legend. It turns out that this season’s Caraval revolves around Tella, and whoever finds her first is the winner.

Scarlett has been told that everything that happens during Caraval is only an elaborate performance. Nevertheless she becomes enmeshed in a game of love, heartbreak, and magic. And whether Caraval is real or not, Scarlett must find Tella before the five nights of the game are over or a dangerous domino effect of consequences will be set off, and her beloved sister will disappear forever.

I was almost certain that I might not come across a book this year that I would truly enjoy, but Caraval may have saved the day!

Caraval has been on my want-to-read list ever since it came out last year and I’ve almost bought it a dozen times while in Books-a-Million, but for some reason would decide to go with something else.  However, Amazon came through (or I suppose the publishers of the book did) when it was a Kindle daily deal sometime back in January or February.  I immediately bought it and couldn’t wait to start reading because I knew by reading the description of the story that Caraval was just going to be a book I would love.

And I was right. This was exactly the type of story I like.  It’s fantasy with romance and a magical world to get lost in, which are all prefect elements to books I love to read.  I will admit though that the beginning was a little slow for me, however that isn’t very uncommon in fantasy novels because world building is apart of the genre and that usually takes up some of the plot.  It was easy to get over though because once the main characters were in Caraval the story really began to take off and I couldn’t put it down. T

There is so much mystery surrounding the game of Caraval and it’s creator, Legend, that as the reader you seem to get lost in this magical place as much as Scarlett does.  And I think this makes her as the narrator of the story  a great idea because you see Caraval through all of Scarlett’s first time experiences with the game.

Also the imagery that came to my mind while reading the book showed to myself at least how much I liked Stephanie Garber’s writing.  She brings Caraval’s world to life well by her descriptions of the places and people Scarlett meets while in the game. I didn’t feel overwhelmed at anytime by the magic in the story or the world building either, but I could tell while reading the book that there was so much more to explore in this world in future books.

Which I’m super excited for the next book in the series that I already pre-ordered.  When I finished the book and knew I had to pre-order the next one, that was the best way for me to tell I really liked Caraval.  Plus I don’t have to wait that long, as it comes out the end of this month. Yay!

One thought on “Caraval: Book Review”