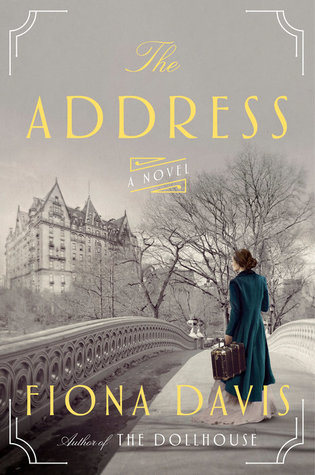 Told in the perspective of two different characters, The Address follows Sarah Smythe in 1884 as she is given the opportunity to become the lady managerette of The Dakota in New York City after a chance encounter with the architect Theodore Camden at her former job in London.

The other perspective follows Bailey Camden in 1985, who fresh out of rehab is given the chance to start a new by her “cousin” Melinda to renovate her apartment, the former home of Melinda’s great grandfather Theodore Camden.  Bailey, who’s own grandfather was the ward to Theodore, has always known the rumor that surrounds Melinda’s apartment; which is that the famed architect was murdered by a former servant of the Dakota, Sarah Smythe.  But Bailey soon begins to uncover the truth behind that tale.

One of the reasons I’ve hesitated to write some book reviews as of lately is that I haven’t really been enjoying some of the books I’ve been reading in the past few months.  I feel as though most of these books have so much potential to be great but end up falling flat in the end.  I also don’t love writing negative reviews.  I find them unpleasant to write and never like trashing something someone has spent a lot of their time on creating.  However if I want to keep my blog going I’ll have to write reviews that are both good and bad, and I always want to be honest about how I feel about the things I read.  So with all that said The Address was not my favorite Historical fiction book.

For starters I don’t love dual timelines. I find that if they aren’t written well I can get the characters mixed up or find it hard to follow.  Also Bailey’s story wasn’t really interesting to me.  I realize that she is used to uncover the mystery surrounding Theodore Camden’s death, but I could have done without her all together and purely had a story that only was told through the eyes of Sarah.

Sarah’s story also takes a weird turn.  It is almost as though the author came across some interesting history during the time period and decided to add it in, but she speeds through it so quickly I wonder if it was even worth telling the story that way.  In my opinion Fiona Davis could have found a better way to tell this part by going a different path.  But what do I know?

By the last one hundred pages I was ready to stop reading The Address all together.  I had more or less figured out how it would end and had almost completely skimmed all the Bailey chapters to get to the end as soon as possible.

I feel that if I’m going to read a Historical Fictional novel I would prefer it stuck to one time period instead of two.  I know it is possible to have a dual timeline that works, for example The Wedding Dress that I read back in February did a nice job.  And my all time favorite novel The Nightingale also does a nice job, but it only touches on a more present time period all of three times and mainly focuses on past.  I guess what I’m trying to say is the author of The Address just didn’t have writing style I was looking for, and I know it could have been better.