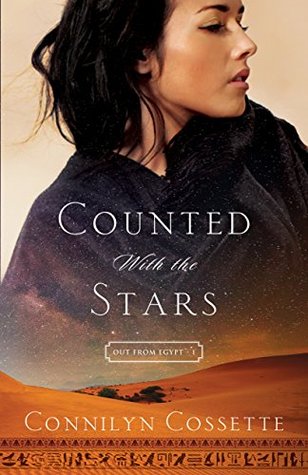 Title: Counted with the Stars

Over the summer I was given the opportunity to review Wings of the Wind, the 3rd book in this series Out of Egypt, but at the time I had thought it was a standalone book.   It hadn’t seemed to matter that I’d read the last book first; however, now that I’ve started from the beginning I’m seeing how different Wings of the Wind could unfolded as some the characters would have been familiar.  Counted with the Stars makes the title of the series more understandable, as the first book is mostly set in Egypt.  The novel follows Kiya, the daughter of a prominent man in Egypt, who is sold into slavery after her father loses all of his money.  Kiya serves in a house along with Shera, a Jewish slave, who begins an unlikely friendship with Kiya and can explain all of the strange things happening in Egypt.

This book is a Christian Historical Fiction novel and it centers on the exodus of the Jews from Egypt and follows along with the events during the seven plagues.  Much like the other story I read in this series, the author writes the events that happen during the Old Testament from the points of views from those who would have witnessed them first hand.  Biblical Historical Fiction in Christian novels are far more preferred by myself than those set in Victorian or early 20th Century eras.  I find the latter to often feature the lead female of these novels with weakened character traits who are too enamored with romance and toil over seemingly mindless things.  While Biblical Fiction can be more adventurous and have stronger female characters that I often like reading about better.

Counted with the Stars flows much like Wings in the Wind did, which is common in most books written by the same author.  This wasn’t however too evident while reading Counted with the Stars and I didn’t feel that the plot was becoming overly predictable.  I enjoyed following the events through Kiya’s eyes.  Seeing it as an Egyptian who witnesses the plagues before her and not understanding it as Shera did, Kiya makes for a great narrator.  When I originally read the summary I assumed that half of the book would focus on Egypt and the other would concentrate on the exodus, but much to my surprise a majority of the book is set in Egypt.

I would rate this book higher than Wings in the Wind, though barely.  The series has been really great so far and I look forward to when I’m able to read the second one.  As has been the case with other book series I’m almost certain the second book will be my favorite.