I’ve reformatted the way I write my book reviews. I might still be making a few changes on occasion but I’m trying to find the best layout for this blog. 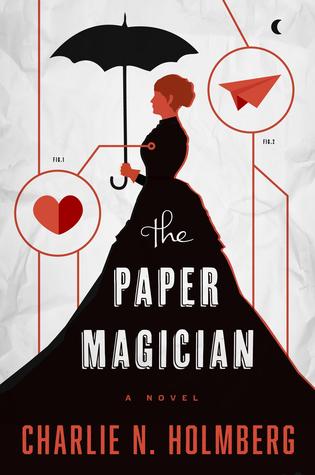 Ceony Twill has just graduated top of her class at Tagis Praff School for the Magically Inclined, however her dreams are dashed once she learns she will be an apprentice for paper magic and not a smelter as she had always planned. Ceony holds her apprenticeship under Professor Thane who charms her into learning the world of paper magic. All is well until an excisioner, or dark magician, literally rips Professor Thane’s heart from his own chest. Ceony must take what little magic she has learned and save her teacher, which comes with a little bit of a twist as Ceony finds herself confined  within his still beating heart.

What I liked about The Paper Magician:

I though the story was charming and I really enjoyed the narration. Choosing to do this book as an audio I think made it more enjoyable to me than if I were to read it.  I found the beginning of the book to be magical and getting to learn about Ceony’s magic was interesting.

What I did not like about The Paper Magician:

The Paper Magician can be a bit boring during the middle when Ceony is trapped inside Thane’s heart (this by the way is not a spoiler it is literally written on the back of the book). Those chapters can be long and at times I couldn’t see the point to why the scenes inside the heart needed to last for so long.

Overall, I liked The Paper Magician. I didn’t love it but I will continue on with the series. I’m interested enough to know what happens with Ceony and Thane as they move on from the events that take place in the first book. I’ll probably continue the series as an audibook though because I think I might become uninterested with the stories if I were to read them.

One thought on “Book Review: The Paper Magician”