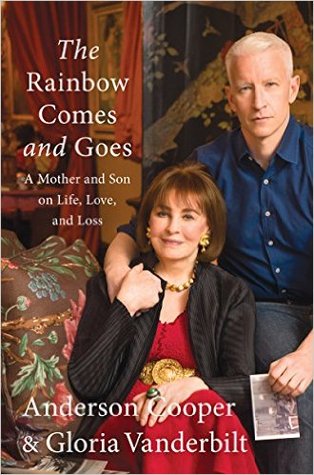 Title:  The Rainbow Comes and Goes: A Mother and Son on Life, Love, and Loss

On Gloria Vanderbilt’s 91st birthday her son, journalist Anderson Cooper, starts a series of emails asking about details of her life. These events include the very public custody battle for her between her mother and aunt; the many famous love affairs she has had; and the losses she has experienced from her father to her husband to her son.

What did I think about the book?

One of my favorite books of all time is the Memoir Anderson Cooper wrote back in 2006. I have literally read it at least half a dozen times. When I saw that he and his mother, Gloria Vanderbilt, had wrote a book together I knew immediately that I was going to read it.

For the most part I knew nothing about Gloria before reading this book. Outside of the fact I knew she was Anderson Cooper’s mom, I was old enough for her designer brand jeans or when she famously date Frank Sinatra or Howard Hughes. And I think because I didn’t know any of these things it made the book all that more interesting. Though I’m sure even if someone did know something about Gloria Vanderbilt you’d still enjoy the book.

I really liked Gloria’s writing. She paints pictures with her words and you can understand her emotion when she was retelling a story to her son. While the book does focus mainly on Gloria you do get the see the dynamic between Mother and Son as book goes along. And it made me want to start a conversation not just with my mom but my grandmother as well. I think there is value in knowing who they were just as much as who they are now.

Who would I recommend this book to?

Besides anyone who loves either Gloria or Anderson, the book would be great to read with a parent. It also great for anyone who loves history especially history set in the 30s, 40s, and 50s. Gloria Vanderbilt not only comes from a well known family but she has certainly blazed a trail herself as both a young and older woman.

Who would I not recommend this book to?

To be honest I’m finding this question difficult this time around. But I also might be bias about one of the authors. I suppose I wouldn’t recommend this book to someone who doesn’t like nonfiction or has no interest in the two people I have mentioned multiple times by now.